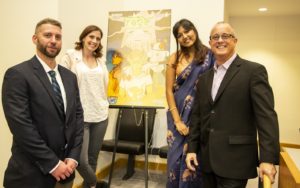 DeCheser Media partnered with The United Nations, UNICEF, PCI Media Impact, and Comics Uniting Nations in support of inspiring and engaging today’s youth to take climate action through the channel of creativity. UNICEF launched the Climate! Comic! Contest!, where young people were asked to create a superhero comic book to fight against climate change. Having previously worked with UNICEF on a special version of the Night Stars comic to raise awareness about world hunger, DeCheser Media jumped at the opportunity to be a part of this unique and one-of-a-kind experience.

Executive Producer, Michael DeCheser, was invited to speak alongside Laurence Chandy, UNICEF’s Director of Data, Research and Policy, Miroslav Lajcak, President of the 72nd United Nations General Assembly, and Syed Akbaruddin, Ambassador and permanent representative of India to the United Nations at the fourth SDG Activate Talk on April 19. Following the opening remarks, Michael DeCheser and contest winner, Sathviga ‘Sona’ Sridhar, introduced her climate superhero, TRé, to the world. After nearly 3,000 submissions by children and youth from 99 different countries, and more than 21,000 votes from 162 countries, Sona’s character was declared the winner after receiving the highest number of votes from the public on the contest website. Sona spoke passionately about her opportunity to be able to share her desire to take action against climate change through her love of art and illustration, and how it felt to be the voice for thousands of young people who also wanted to inspire climate action.

“When we agreed to mentor Sona in the production of this comic, one of our goals was to create a rewarding experience for her, but it ended up being a very rewarding experience for all of us,” DeCheser said. “My team had the absolute pleasure of working with Sona and guiding her through the arduous process of storytelling, penciling, inking, coloring, lettering, and all of the behind the scenes magic that makes a comic book a comic book. What an awesome project to work on with an amazing and inspiring group of partners.” The DeCheser Media team included Katrina Carr along with Tim Lattie, the author and Illustrator behind Night Stars. To watch footage from the fourth SDG Activate Talk and learn more about Sona and the panel of young people applying their passion and skills toward climate action, visit here.

TRé – The Adventures of Brother Earth officially launched on Earth Day, April 22, and will be available to read in 13 different languages. The comic is currently available to read here in English, Spanish, French and Hindi. To find more information on the contest, superhero descriptions and artwork, visit the contest website: http://climatecomic.hscampaigns.com/. 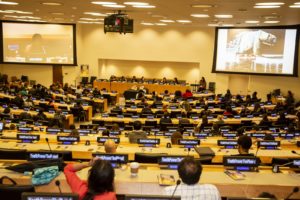 DeCheser Media is an award-winning New Jersey based media company with expertise in creating dynamic productions for some of the world’s most admired brands. Passionate about storytelling and new technologies, the company strives to deliver each message in the most visually captivating way. With over 25 years of experience and an outstanding team of writers, directors, producers and cinematographers, DeCheser Media can handle projects of nearly any scale and genre, worldwide. For more information, email contact@dechesermedia.com or visit www.dechesermedia.com.

You May Also Like
DeCheser Media Backstage at the 59th Annual Grammy AwardsMedia RelationsFebruary 12, 2017January 17, 2019