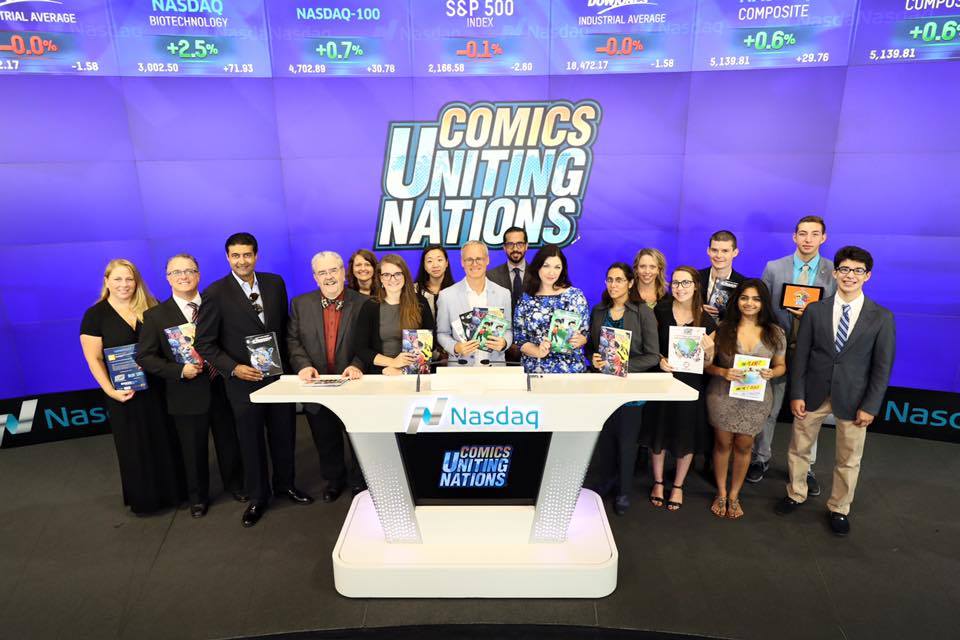 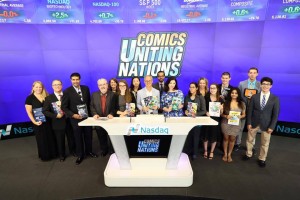 DeCheser Media’s own Michael DeCheser joined UNICEF, PCI Media Impact and Comics Uniting Nations in visiting the NASDAQ MarketSite in Times Square to ring the Opening Bell on July 28, in celebration of the Night Stars’ special “Hunger” edition. Comics Uniting Nations, UNICEF, PCI Media Impact and DeCheser Media are partnering to bring the message of sustainable development to the children of the world through universal visual language and the transformative power of comics.

Early in July 2016, Comics Uniting Nations released a special one-off issue of DeCheser Media’s Night Stars comic series to support UNICEF’s global goals agenda to create a better world for all people and the planet and make progress on 17 global goals. This special edition issue of Night Stars features John, Adam, and Leslie helping a young girl and her village in the effort to end world hunger.

“Night Stars author and artist, Tim Lattie and I wanted to tackle the Zero Hunger goal because we felt that the back-story of Night Stars would be an excellent platform to incorporate UNICEF’s message to end hunger, improve nutrition and promote sustainable agriculture,” said DeCheser. Click here to see some highlights from the Opening Bell ceremony at NASDAQ MarketSite. To read this special edition issue of Night Stars, and the other comics on Sustainable Development Goals, visit www.comicsunitingnations.org.